The Goatman of Maryland


The Goatman of Maryland is a legendary half-human, half-goat creature that carries an ax.

Wikipedia -
According to legend, Goatman is an axe-wielding, half-man, half-animal creature that was once a scientist who worked in the Beltsville Agricultural Research Center. The tale holds that he was experimenting on goats, the experiment went awry, and he began attacking cars with an axe, roaming the back roads of Beltsville, Maryland. A variation of the legend tells of Goatman as an old hermit who lives in the woods, seen walking alone at night along Fletchertown Road.
Folklorist at the University of Maryland Barry Lee Pearson said modern examples of folk legends like Goatman are most commonly generated by teenagers, and the stories end up stirring interest in sites like Fletchertown Road
[﻿Source: Wikipedia]﻿

The Goatman has been described as being between 6 and 7 feet tall. The first reports of Goatman date to around 1957 but sighting have continued over the years. The Goatman also gets around some with numerous sightings from various places, including Texas, California, Indiana and Canada. Lets just say he hoofs it. (Sorry bad pun) 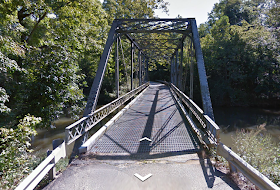 Some people attempt to tie the Goatman to Greek Mythology and as being Pan. Pan in mythology was the god of the wild, a half human half goat type of creature, While others tie Goatman to the devil himself. Another interesting fact about Prince George's County is that it is home of the demon possessed boy in which the hit movie The Exorcist was based on.

The Goatman is not only is said to stalk and terrify humans but reports claim Goatman snatches and kills small pets such as dogs and cats. Numerous carcasses have been found over the years and not knowing what really killed these animals, Goatman got the blame.

The Goatman is an interesting legend for many reasons, from ties with the Devil, to stalking lovers in parked cars, to killing your family pets. Goatman continues to strike fear in some people and it appears the legend is here to stay.  It is also worth noting that having a insane asylum near by only adds to the terror mystic.

So when driving or visiting Maryland keep your ears sharp for the sound of a braying goat and your eyes peeled for the glimmering of an ax, because you never know when the Goatman will strike next.

(Interested in sponsoring a story? then send us an Email!)


70+ videos & 650+ pictures  on our facebook site check it out by clicking the link below.
facebook.com/TheCryptoCrew


Have you had a close encounter or witnessed something unusual?
Send us an Email