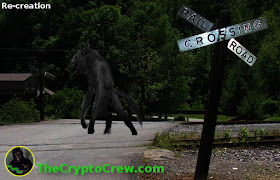 As some of you may know, I recently set up at the Crypto Con in Harlan Kentucky. During this event I was able to talk to a lot of people. I was able to talk to several witnesses who had sightings or found possible evidence. While some of the reports may not contain all the details, I think some of them have enough information to go ahead and document the event.

So, today I want to share a possible Dogman sighting that was reported to me during the event.
Now, as stated some of the details are missing but after talking with the witnesses it became obvious that they actually saw something.
Here is the report followed by some additional information.

Describe Sighting:
We saw a Dogman coming across the railroad tracks. My sister and I was walking home after work when we seen the creature. It was late in the evening, dusty dark. The figure itself was dark and slightly hunched over. It was moving slow and was not in a hurry. It was tall and on 2 legs. It also had a dog snout.

While talking to the two sister they both told me they were scared during the sighting. That the figure did not pay any attention to them and continued to move at a slow pace. It was my understanding that this sighting took place within the last couple of years. One of the sister works fairly close to where they live and it is common for her to walk to and from work. I do know where the area is at and it has plenty of water and lots of woods. Near by there are several businesses but if you go behind these stores there are only a few houses and lots of forest land.

I wonder in cases like this if the Dogman or Bigfoot is coming down to local restaurants and getting the discarded food that is thrown away. It would be an easy meal and if it was very late at night there wouldn't be very many people around.

I think this is the first firsthand Dogman sighting that has been reported to me from my area. I have had a couple second hand type of reports but not the actual witness themselves. Several months ago I did speak with a man who claimed to have a Dogman on his property. He claimed to have some pictures and he told me a little about it but was unwilling to show me the pictures of tell me his location.

I did follow and attempt to investigate a possible Dogman sighting in Bell County. But I got the original report via a forum. I was able to get more information from some locals but I never spoke with the original witness. It was an interesting case. You can read about it by clicking this link Strange Creature Seen on Hwy 119

If we have Dogmen in this general area, it appears that is a very low number of them or they are really good at not being seen.

I want to thank Brandy and her sister for sharing their sighting with me.
I hope to share a couple more reports I got during the Crypto Con event over the next few days.