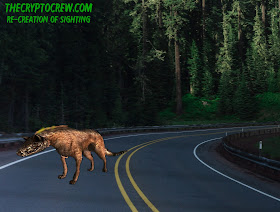 Over the years we have had a few Shunka Warakin reports sent in to us.  Most of those reports were from Iowa. The report for today took place in Montana...which is considerably a long distance from Iowa.

For those who may not be familiar with the Shunka Warakin, here is additional information.

The Shunka Warakin is an animal mentioned in American folklore that is said to resemble a wolf, a hyena, or both. According to cryptozoologist Loren Coleman, shunka warak'in is an Ioway term meaning "carries off dogs". Coleman suggested that the creature was some animal unknown to modern sources. Ioway is a term related to Native American Siouan people.

Here is the report
-Start report-

"I was driving downgrade on a 2 lane road in a 91 Ford f350 4x4 diesel 5sp, no lift, but I had made a gigantic steel front bumper for it. I had a loaded car trailer behind me. The reason I mention these details is because I shouldn't have minded hitting what was crossing the road ahead of me, but it scared me so much I wasn't sure my monstrous truck would kill it... I wasn't confident my bear slug loaded .410 shotgun revolver pistol would kill an injured it.... So with bad brakes I served to avoid hitting this... Creature.

Shaking with fear I exited my truck, engine off to see where the creature went, gun in hand.

It had disappeared.  The roads edges were 20ft steep drops, in the distance green Field and a housing development in the distance- I felt bad, forgot people..

So the sighting- I was driving down the hill, up over the oncoming Lanes embankment stepped a giant white canine creature. My first thought was... That's not a wolf. Wtf is it?

Probably 4 ft tall and the shoulder. Muscular. Covered in white fur. A mohawk of dingy yellow hair spikes from it's neck to it's butt. The spikes were a good 10" in the middle and got smaller towards the rear, they seemed me to be just hair, not rigid or anything. It had a canine like white tail, proportionate to it's size. It had the dog kicked legs in the rear. Most puzzling to was the head and snout. It had pointy white furry ears, predator positioned dark colored eyes, black Jowl lining, and protruding teeth. But the snout is what really Disturbed me. It was LONG not alligator long but weird long. Like maybe 18"+ long.

So this canine walks up onto the road, I'm just staring, going maybe 30mph down the steep hill in 3rd gear with the loaded car trailer. This animal covers the entire width of the oncoming Lane and then some. When it's head was in the center of the road while walking slowly it turned it's head towards me and LOOKED AT ME. It was then that I was just beyond not confident that my truck and gun would have killed it. I FELT a "don't f**k with me" message from it's look...

So I swerved into the empty oncoming Lane as the creature was in the lane I swerved from.

Like I said above I got the truck stopped on the grade and got out and looked for it, curiosity I suppose.

I got home and immediately Drew the creature, I researched and researched and found the Stanford MT white wolf legend. Not a match. (Have email in an effort to obtain the drawing)

I gave up and decided it must have been a large albino North American ant eater.

It was only October 2019 while listening to a podcast called monsters among us that I learned about the Shunka Warakin, my heart was booming hearing the caller describe the animal!! In Montana!! Having the name I then looked up the creature and learned some more and saw some photos but only one photo is close to what I encountered. I attached the photo. Very similar, but the one I saw was white with the yellow fur Spike mohawk."

Thanks goes to Cory for sharing his sighting with us.
If you would like to read our other reports on the Shunka Warakin, just search shunka warakin in the bar on the top left of the page. If you have seen something similar, then click the report a sighting link at the top of the page.