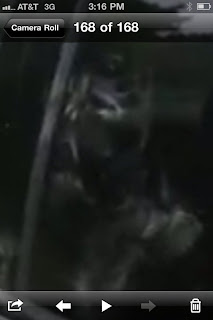 This is what the breaking News Conference is all about....the photo got leaked and here is some of the story.
Bigfoot's face print showed up on Sanger Paranormal's website early or it was intentionally leaked and then removed a short time later. The face print was meant to be unveiled during their news conference on the 23rd, but now w...e don't have to wait that long since a clever Cryptomundo reader was able to save the image for us.

The face print wasn't all that was unveiled on this wonderful day. AOL Weird News acquired the first exclusive access to their foot print photo and their ideas about what to do next.

Jeffrey Gonzalez, an AT&T electronics technician and founder of the Sanger Paranormal Society.

Gonzalez and several others were in California's Sierra National Forest searching for evidence to confirm the reality of the creature. When it started to snow at their campsite, they were forced to leave two of their vehicles behind.

"Apparently, the creature was looking in the window and left behind dirt and oil on it, leaving such an awesome picture, you can see the nose, the eye, the hair all over the face and the shoulders -- it's creepy, and it's not a bear."

Gonzalez and his friends -- including a former science teacher and a correctional officer -- also found a 12-inch footprint at the site. They concluded their hairy intruder wasn't a bear because none of the four ice chests that were filled with food on the back of Gonzalez's truck had been touched.

But it wasn't just the passenger side window that presented a surprise -- the driver's side of the truck showed the imprint of a much larger creature, strongly suggesting there were two unexplained visitors to the campsite.

"An impression was left of a nose, eyes and lips, but they were extremely large," Gonzalez said. "The lips measured about 6 inches long. You can see that the whole face was full of hair, so when it leaned up against the window, you can see the depth of the eye socket in the glass.