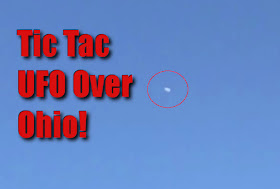 This silverish white tic tac object was filmed for well over five minutes above a Toledo, Ohio neighborhood. This is a very recent video capture that took place on July 28th. The object seems to sit still a while and then move a little. This video has several interesting things going on in it. During some enhancements of a segment of video, the object seems to be moving, which made me think it resembled the movement of balloons. At times, during the enhancement,  the object appears to be two or three round objects that separate and then come back together. But at the end of the original video the object starts moving and picks up speed and appears to be under a controlled flight.

Now a little more about the filming of the object before we get to the video itself. The witness was just walking through the neighborhood when they notice the object and began to film it. There is really no sound during the filming, until the very end and you hear what sounds like a small child talking. There was no conversation about the object that I'm aware of, unless the sound was edited out before posting.

With all that said here is the video with some enhancement, please watch until the end.

Now, I'm no sure what this is or isn't but the movement does not seem to fit my balloon hypothesis as the object seems to accelerate away at the end of the video.

If anyone else seen this object or have video/pictures of it, then please let us know.