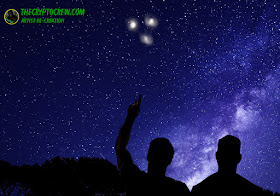 I got the following UFO report submitted a few days ago. I have messaged back and forth with one of the witnesses and obtained additional information.

The sighting took place in Clay county Florida. Clay County is located in the northeastern part of the  state. The area has a rather large population and was once a very popular tourist spot.

Any Photos/Videos: Yes, however unclear and inconclusive

Sometime Between 1 and 3 am, I was with my childhood friend, Alex, we were outside of my house having a quick chat before he had to leave.

I was looking up at the stars and thought I saw something moving, wasn't sure however, so I didn't say anything. Roughly 5 minutes later Alex looks up at the stars and says “Hogan, whats that?” and he points to the exact same thing that I saw. I could only describe it as a star that didn't twinkle and had a medium to medium-bright brightness to it. It was moving at a very slow rate, and at an extremely steady speed. We watched this single star move roughly east for about 15 minutes, at this point we both noticed 2 other “stars” that was moving in the opposite direction, towards the first “star” in the shape of a triangle. After about 3 minutes the 3 “stars” stopped moving and began to move in a circular fashion. This lasted for only 30 seconds at most. After that 30 seconds all 3 of the stars moved away from each other at an extremely fast speed.

I was extremely confused and a little scared as to what I had just seen. Neither me or Alex talk about the sighting anymore.


I’ll see if i can get the photos that Alex has since he is the one that took them, however I remember the camera on his phone wasn't able to pick up on any of the stars in the night sky and the images were almost entirely black with the typical digital noise found on phone cameras.

Thanks goes to HG for sharing his sighting with us. As stated this area has a rather large population, so if anyone saw something similar around the same time frame, please don hesitate to contact us and tell us about it.